Ludo Buti and colleagues in Xin Lu’s research group find a path that could reduce colonisation of human stomach cells by the cancer-causing bacteria, Helicobacter pylori.

Half of the world’s population is infected with Helicobacter pylori, which is the major risk factor for stomach cancer, and the World Health Organisation has classed H.pylori as a high priority pathogen against which new antibiotics are needed. A Ludwig Oxford study just published in the journal PNAS sheds light on how H.pylori infection disrupts the molecular organization of human stomach cells.

Strains of H. pylori that cause cancer inject a toxin called CagA into the layer of cells (epithelium) lining the stomach. CagA sets off a chain of molecular events changing the characteristics of the stomach epithelial cells, making them more prone to transform into tumour cells. For example, CagA causes cells to lose their polarity – their specialized ‘top and bottom’ organization – but it hasn’t been worked out exactly how loss of polarity is triggered and whether it has an effect on the bacteria’s ability to colonise human cells.

The tumour suppressor ASPP2, best known as a regulator of p53, can interact with CagA and also can influence cell polarity, so Xin Lu and colleagues hypothesized that the CagA-ASPP2 interaction might be crucial in H. pylori-triggered loss of cell polarity. They used stomach cell culture and state-of-the-art organoid technology to look at the effects of CagA and ASPP2 on the cellular organization of polarity proteins. Organoids are 3D ‘ex vivo’ cultures of cells taken from human tissue samples – in this case, from the stomach lining – and they can mimic what happens in the body more closely than traditional cell cultures. Their study revealed that ASPP2 is a central player in the disruption of cell polarity by CagA during H.pylori infection.

Intriguingly, they also discovered that interfering with the CagA-ASPP2 interaction, using small molecules or a specific protein fragment (peptide), not only prevents loss of cell polarity but also reduces the ability of H.pylori to colonise organoids. This offers a tantalizing prospect that preventing bacterial pathogens from disrupting host cell polarity could be a strategy for the future development of new antimicrobials to limit the damage caused by infection. 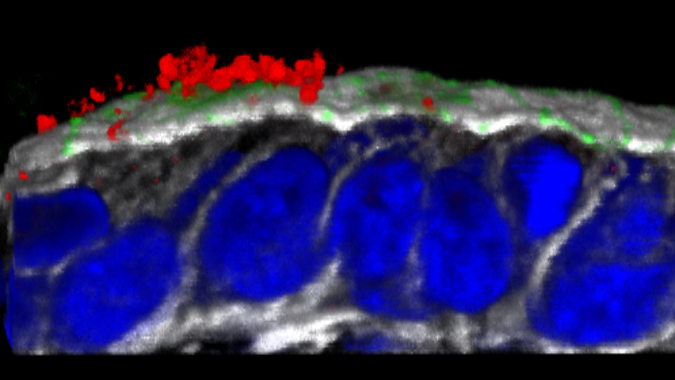