Hypoxia is a central component of most human diseases, including cancer. Profound tissue hypoxia is common in solid tumours, and is associated with treatment resistance and adverse prognosis.

Insights into the sensing and signalling of hypoxia have provided a new opportunity to understand these associations and their implications for cancer biology. This work has revealed the central mediator of transcriptional reprogramming in hypoxic cells as a heterodimeric DNA binding complex termed hypoxia inducible factor (HIF). The oxygen sensitive signals that regulate HIF are generated by a series of ‘oxygen-splitting’ 2-oxoglutarate-dependent dioxygenases (2OG oxygenases), which catalyse post-translational hydroxylations at specific residues in HIF-alpha sub-units. In the presence of oxygen, HIF prolyl hydroxylation promotes proteolytic destruction via the von Hippel-Lindau (VHL) ubiquitin E3 ligase, whilst HIF asparaginyl hydroxylation blocks co-activator recruitment. Hydroxylation is suppressed in hypoxia, allowing an active HIF complex to assemble.

Our laboratory has been centrally involved in defining these pathways and is now pursuing a series of interrelated lines of investigation into their role(s) in tumour hypoxia and cancer development encompassing: 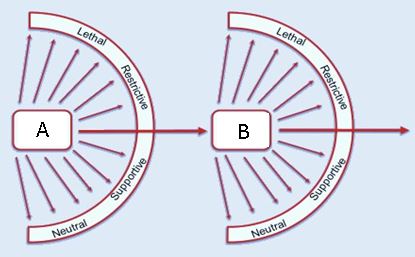 We are aiming to answer both specific questions as to the roles of particular responses to hypoxia in promoting or restraining cancer development and general questions on the role of ‘oncogenic switching’ of massively interconnected signalling pathways in driving cancer phenotypes (see figure). In particular we hypothesise that the activation of extremely complex interconnected pathways (exemplified by hypoxia signalling) entrains a large number of anti-tumorigenic as well as pro-tumorigenic effects as cancer develops. We are exploring the influence of modifiers that shape such pathways to generate a more oncogenic profile, their reflection in patterns of gene expression, and the importance of such processes in selecting for tumour heterogeneity, chaotic patterns of gene expression, and resistance to treatment.

The work involves studies of the human genetics of renal cancer in which hypoxia pathways are constitutively activated and model laboratory systems where we are using lineage tracing technology to define the earliest events in cancer and track their evolution.